The BJP/RSS cadre is holding booth-in-charge meetings at local temples as the entire Union Cabinet, followed by Prime Minister Narendra Modi, readies for the final push to Assembly elections in Gujarat. 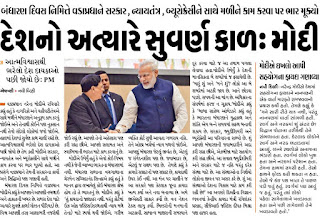 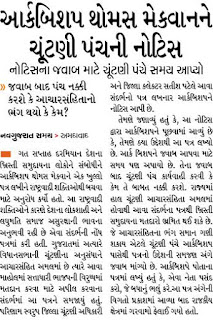 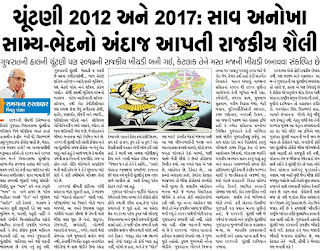 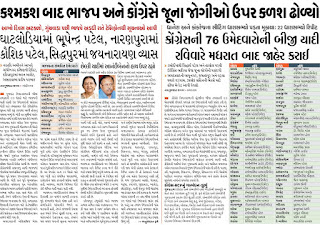 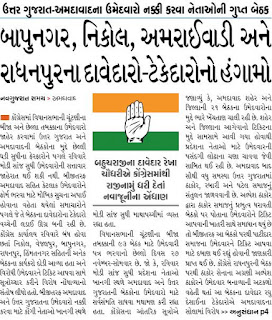 The Congress seems invigorated in the State with a visible voter disenchantment over GST implementation and new caste calculations.
The Mehsana story

In Mehsana, a BJP fortress which defeated the Congress even in the face of the tidal wave following Indira Gandhi’s assassination in 1984, young voters are restless. The new leaders, especially Hardik Patel from the Kadva sub-caste of the powerful Patidar community, who represent the Congress’s attempts to stitch a new social coalition, have found some traction here.
“There is some division in our community. I will support the BJP but some of the young people may vote for the Congress. I think 10-12 per cent of us may go to the Congress,” said Gopalbhai Patel at the Ambaliyasan station here.
The Patidars, who are essentially a landowning, farming community which has successfully transitioned into various business ventures, were at the receiving end of police excesses following the launch of Hardik’s agitation for a quota in the OBC category. Against the Congress’s Khashtriya, Harijan, Adivasi and Muslim (KHAM) formula, the Patidars created and built the BJP’s base in Gujarat.
Even at its worst, in the 2014 general elections, the Congress still retained a vote share of 33.45 per cent. The difference between the two traditional rivals in the 2012 Assembly elections was 8.92 per cent, with the BJP securing 47.85 per cent of the vote share and 115 seats and the Congress geting 38.93 per cent vote and 61 seats. That they should even be discussing the Congress in the context of elections is worrisome for the BJP.
The caste calculations are sought to be reworked at a time when the State — with its mercantile DNA — has lost business and money in the process of GST rollout although the popular angst remains unquantifiable.
The BJP is conscious of the challenge but seems confident of not just countering it but getting a “record victory”.
“It is true that Rahul Gandhi has created confusion. It is also true that some people are angry with the GST rollout. But we are winning them back. And there is still time for polling. You mark my words, we will break Madhavsinh Solanki’s record and get over 150 seats in the Assembly,” a top BJP leader who did not wish to be named told BusinessLine.
What it means is that besides the razzle-dazzle of the PM, the Union Cabinet and other BJP leaders landing here next week for campaigning, party president Amit Shah has toured the State twice and examined the nuts and bolts of a booth-management system set up during the 2014 elections. Dinesh Patel of Chatral village, who is among the several prabharis (in-charge) of this booth in Mehsana, said a meeting of 170 panna pramukhs (persons in charge of voters’ lists) was held at a temple nearby. “What each of us does is to be in touch with 40-50 voters for one hour every day. We facilitate voting. We are helping democracy. In Gujarat, the BJP will be back. Gujarat will never betray Narendra Modi,” Patel said.
The sense of the contest on the ground is that it is keen and the Congress, unlike previous elections, has managed to put up a show that has aroused interest enough for the BJP to be extra cautious.