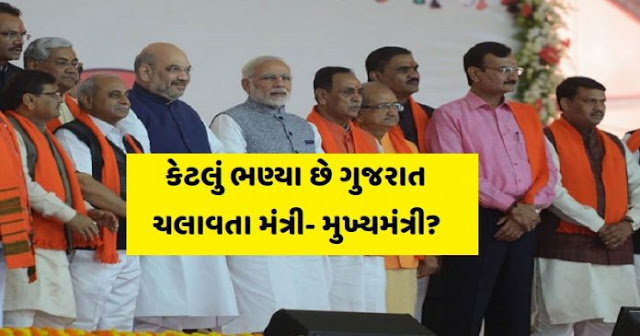 Leaders play an important role in democracy. People elect leaders and in return the leader does the work of the people. Leaders are called representatives of the people. Makes laws for the people, makes decisions in the interest of the people. Therefore a leader should always be educated. Let us know how educated the ministers of Gujarat, including the Chief Minister and Deputy Chief Minister, who take important decisions, are.

Vijay Rupani is the Chief Minister of Gujarat. The chief minister is called the head of state. Makes important decisions. Vijay Rupani holds a bachelor's degree in Arts and an LLB from Saurashtra University.

As Nitinbhai Patel is the Deputy Chief Minister of Gujarat, his position is also very important. He passed 12th and studied till the second year of Bcom. Then quit studying. He also handles the health department.

Ranchodbhai Chanabhai Faldu is the Agriculture Minister of Gujarat. He studied up to 10th standard from Virani Science College (formerly SSC School) in Rajkot.

He is the Education Minister of Gujarat. He earned his B.A., L.L.B. And studied B.Ed. He is the most educated leader among the ministers of Gujarat state.

Kaushik Patel is the revenue minister. Those who have 10 passes. He is Seth .B.J. Mehta studied from Modern School.

Saurabh Patel is the Energy Minister of Gujarat. He holds an MBA from the United States.

Ganpat Vasava is the Tribal and Women and Child Development Minister of Gujarat. He holds an M.A. from Gujarat University. Degree.

Dilip Kumar Thakore has studied up to 10th standard.

Ishwarbhai Parmar has passed 10th standard. He studied up to 12th Commerce but failed 12th standard.

Kunwarji Bawliya was in the Congress, then joined the BJP and became a minister directly in the cabinet. He holds BSc and B.Ed degrees from Saurashtra University.

Jawahar Chawda has passed 10th standard from Rajkot College. Jawahar is also an import minister like Kunwarji, first in the Congress, then in the BJP and directly in the cabinet.

Pradipsinh Jadeja has studied BSc Chemistry from Gujarat University. He is the Minister of State for Home Affairs. The above information is taken from the details given in the election affidavits of these leaders. Which are presented on a website called myneta.info.