--> The government will pay half a month's salary to 4.1 million people who lost their jobs in Corona

The government will pay half a month's salary to 4.1 million people who lost their jobs in Corona

The central government will provide 50 per cent unemployment allowance to workers who lost their jobs in the Koro epidemic for three months. This benefit will be available to people coming under Employees State Insurance (ESI). An estimated 8 million people registered with the ESI lost their jobs during the Corona period. This year, between March 24 and December 31, they will be covered under the scheme. That means about 41 lakh people will benefit from this decision. For this scheme Rs. 6,700 crore. The proposal has also been approved by the ESI board headed by Union Minister Santosh Gangwar. 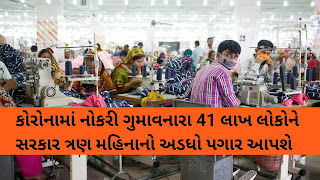 ESI board member Amarjit Kaur said workers who lose their jobs within the stipulated time will get 50% unemployment allowance for three months based on their last salary. It would benefit about 7.5 million workers if they were given a slight waiver based on merit. Rs. Industrial workers with a salary of Rs 21,000 or less are covered under the ESI scheme. About 3.49 crore workers in the country are associated with ESI. This salary will be given under Atal Bimit Vyakti Kalyan Yojana issued from 2018. Under it was a provision of 25% unemployment allowance.

The employer is not required to make a claim, the claim can be made directly to the ESI branch

The positive side of the ESI Board's decision is that the employer does not have to claim to take advantage of the scheme. Workers will be able to claim directly at the ESI branch. It will be verified with the employer from the ESI branch office. His money will also be deposited directly into the workers' bank accounts. Those who lose their jobs will be eligible for benefits only after 30 days. Earlier this time was 90 days. However, a base number will be required for this claim.

According to the Center for Monitoring Indian Economy (CMIE), 1.89 crore people have lost their jobs due to corona since April. An estimated 5 million people lost their jobs in July alone. CMIE CEO Mahesh Vyas said the ESIC member fell into debt as soon as he quit his job. Getting half the salary for 3 months will meet many of their needs. This relief will be available only to workers in the organized sector. The unorganized sector is still excluded from it.

The biggest direct cash scheme so far was the PM Kisan scheme. 6 thousand per annum to the beneficiary under it. Is given. However, its scope is very large. It helps 80 million farmers. According to experts, the scheme has brought great relief to farmers.